The Challenges of Building and Renovating Fraternity and Sorority Houses 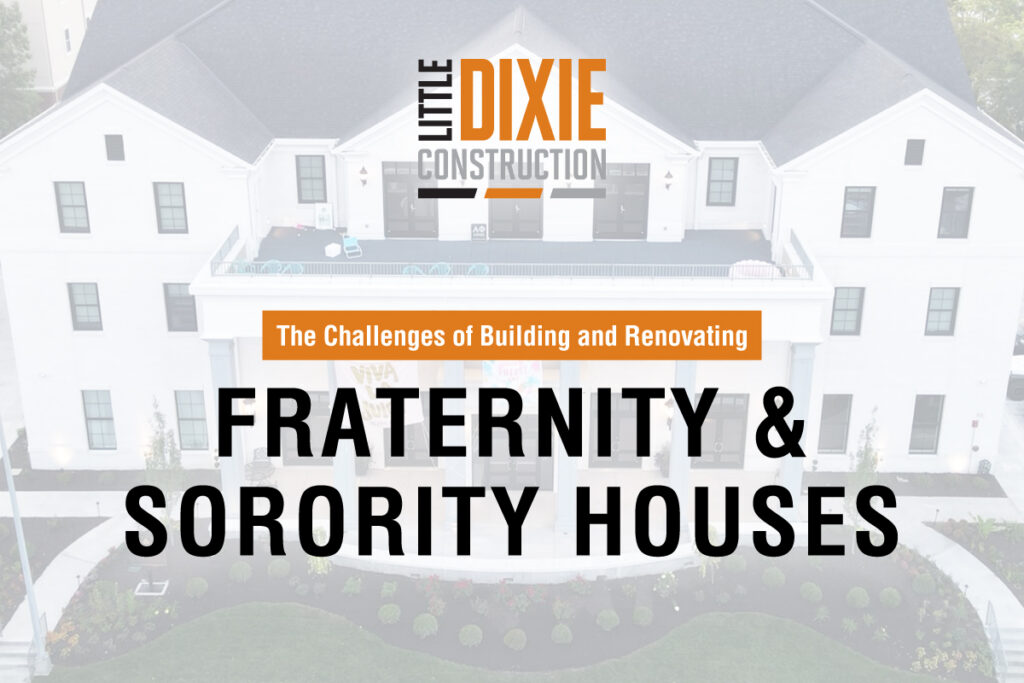 COMO is a college town through and through. Higher education is an institution in and
of itself here, and as the first public university west of the Mississippi River, MU is the
anchor of a vibrant city that continues to grow outside of campus.

Among the buildings that form the university are those housing the Greek Life
community. Many of these stately, massive homes have been here for years and
housed thousands of residents over the years.

As with any home, COMO’s Greek houses need improvements from time to time. And
those renovations often come with unique challenges.

It’s Hard to Get to Old Systems

When the infrastructure of these homes needs upgrading, you have to get behind the
walls. To do that, you must deal with old finishes such as plaster, lath, or wood
paneling. You may also need to address environmental hazards including asbestos,
mold, lead paint, and mercury.

Sometimes, you work around what is there, such as our renovation and addition to the
Phi Kappa Psi fraternity house that was originally built in 1880. Other times, it’s better to
demolish what’s there to make room for a beautiful new build, such as the Alpha Phi
sorority house. Whether the home is original, new, or a combination of the two, the
infrastructure can be state-of-the-art if your construction team knows what it’s doing.

You Need to Accommodate the Sense of Tradition

Few things have a greater sense of tradition than Greek Life. Not only is that reflected in
the ideals of individual fraternities and sororities, but it is reflected in their homes.
Whether you’re upgrading systems or just giving the home a much-needed facelift,
preserving the character of the home is part and parcel of tradition. Wood paneling;
window and door casings; crown and base moldings; hardwood; marble and terrazzo
floors; grand staircases, and other features are integral to the home.

It isn’t always easy to work around the finishes of character homes. Moreover, some
chapters want to restore some of the character that was removed during previous
renovations. You must work with a construction management team that values the
craftsmanship of what’s to be left and who can restore or recreate what the organization
wants to put back. That’s what Beta House and Delta Gamma sorority did when they
updated their homes.

Little Dixie Construction has partnered with numerous Mizzou fraternities and sororities
whose homes are integral parts of their tradition and their future recruiting efforts. Those
beautiful old homes can indeed be a challenge — but it’s one our craftsmen and women
accept with pride.

PrevPreviousThe Impact of the Pandemic on the Construction Industry